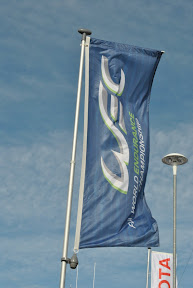 I’m no souvenir-hunter and I don’t go for signed photos, so I left that to the crowds massing around each table. I was perfectly happy trying to get photos of the drivers which is much more interesting to me in the long run. Audi, Toyota and Aston Martin were completely mobbed. 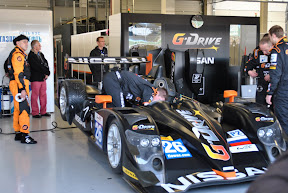 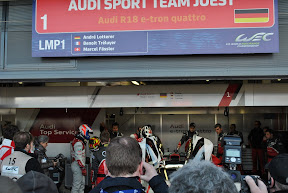 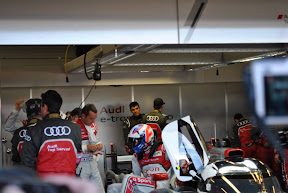 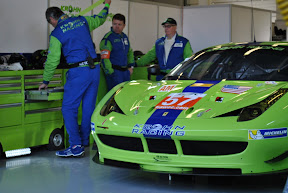 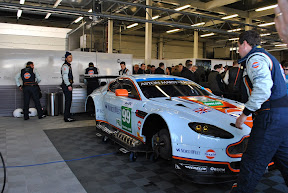 Oh and there was Mike Conway meeting Snoopy.

After the pitwalk I decided against retracing my steps back to the main straight, instead choosing to go the other way, stopping at the FIA WEC and Aston Martin tents pitched on the Stowe Circuit “Fan Zone” to pick up some merchandise. Handily there’s a grandstand nearby overlooking Vale and the pit entry, where I watched the start and first hour. 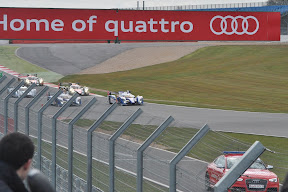 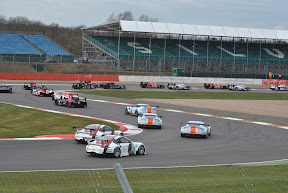 For lap after lap, Alex Wurz kept locking up in the Toyota at the Vale braking zone and elsewhere on the lap. It costs him a position or two as he dropped back.

Without having to brace against the weather I had time to practice, and by now I was starting to get used to the zoom lens! That meant I could get used to the speed of the cars and try different shutter speeds.

From there I worked my way ‘backwards’ around the track to Stowe and Hangar Bridge, crossed over and doubled back towards the pits again on the other side of the track, to take up a seat in the main stands for the last hour or so. The benefit of a six hour race is the luxury of time! I usually walk a lap of the track but having covered the North end the previous day I felt no need to go back and I really enjoyed splitting it over two days. 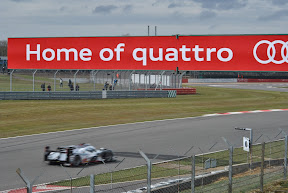 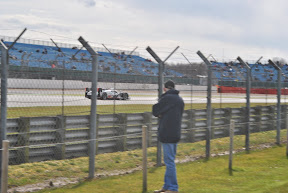 I tried to get a photo of the cars at speed under the bridge, the best one came out like this of the Rebellion Lola – fenceposts!

You get a tremendous sense of speed stood along the Hangar Straight, on either side of it. It isn’t great for photos thanks to the fences (that must of course stay) but I seriously recommend you try it for any race meeting using the full Grand Prix circuit. Being up close and personal with cars this fast and noisy is a great experience. The walk is worth it.

I went up into the stands at Stowe for a bit of lunch. I can’t say I recommend this as a viewing spot, you really do feel distant from the action, but with a nice zoom lens you can get some good shots. With it being a partly cloudy day the low light level and the blazing headlights made it feel like an evening at Le Mans must feel. 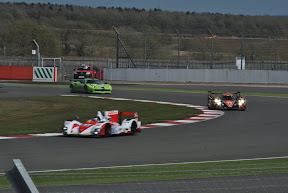 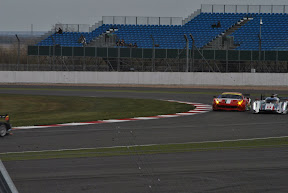 On my way through I briefly sat the opposite side of Vale, the outside.

And then to Club for the view down the new main straight, where you could really see the different lines being taken by different drivers. The Porsche was tidily respecting the limits, the Ferrari completely off track! 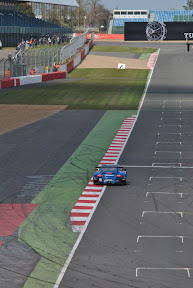 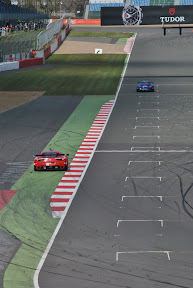 Then it was to the pit straight grandstand for the last 80 minutes and the big finish, where I got a great view into Audi’s part of pitlane.

Lots of media around the pits, TV crew, photographers and the pit reporters for Radio Le Mans and FIA WEC’s TV. 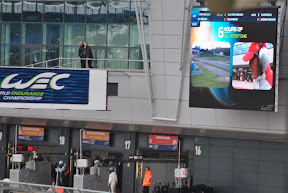 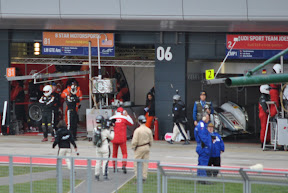 And the 8 Star car got hit by the Larbre Corvette very close to the end:

The reason for sitting opposite Audi at the pitlane entry? It’s just about the only place in the main stand where you can see the podium. Allan McNish caught and passed the sister car to win by 4 seconds!

Either Allan McNish is very small or RLM’s Nick Daman is very tall – probably both!

The LMP1 privateer teams had their own podium ceremony as well, the two Rebellion crews present at the same time as the abandoned Strakka car was recovered.

Each class also had their own ceremony. I stayed for all of them, with at least three hours of driving ahead of me I didn’t want to add to it sat in a boring car park, it makes a lot more sense to let everyone else stew in the queues while I watched the celebrations!

I strongly recommend going to the Silverstone 6 Hours next year, or any of the FIA WEC season around the world. I’m quietly considering either Spa or Le Mans next year. It might be good to do Silverstone and Spa!

For more of my photos from this album please see Picasa.