After the lengthy delays getting in on Saturday, the first thing I did was go to the sculpture outside the House to see if I could catch anyone still there for the planned meetup. This year’s focus was Lotus and the sculpture was another variation of the now-traditional ‘hanging nearly-priceless racing cars at crazy angles’.

Disclaimer – I must’ve used the wrong setting on my camera because the colour seems to have washed out.

It just so happened the sculpture was roped off to put some cars around it, so the mass of people which usually gathers at 1pm to enjoy lunch on the lawn was disrupted, as was our gathering. I did find them fairly easily though. Of course just then Stirling Moss appeared and I rushed off straight away to try and get a photo!

It was difficult but I got a couple of shots albeit obscured by heads, but it was good to see him even though at times he had to be supported by his wife as he walked. He got in a car though! John Surtees and Lord March were also nearby. I stood to watch the cars depart, preferring to enjoy them rather than try and take a photo among the throng, then returned to the group for a chat. It was quickly decided to have some lunch at the new RAC stage the other side of the F1 paddock.

The RAC Stage is a great idea. In past years the area above the main paddock was largely empty with just a few team trucks parked up. After last year (or 2010?) creating a second exit to the Drivers’ Club which emerged in the vicinity, this year they moved the media centre up there and put an interview stage alongside it, complete with raised seating creating a little arena or square.

This was far, far better than having to traipse all the way across to the courtyard near the Supercars if you wanted to hear an interview! I really do hope this arrangement is retained for future years. When we arrived the main screen was playing live video and commentary from the hill. After a little while someone appeared and was introduced as BSB rider Tommy Hill.

Drivers can leave the private area via the side exit, work the autograph line (which was much longer than last year’s), then pop over to the adjacent stage and media centre. It is a much more fan-friendly way of doing it. The old entrance/exit still exists complete with autograph line, so you if you plan to collar a driver you have to think where they’re likely to be!

It was just Tommy Hill’s luck that his namesake Damon appeared through the wall, followed just a few minutes later by Sebastian Vettel. Cue the crowds, cue me and a couple of others rushing over! Of course with so many people around it was difficult to get a clear photo, I do have a clearer one of Damon but I prefer the fan interaction of this one.

It’s great being able to get near to the heroes of racing, especially those from F1 who are usually roped off in the paddock with no access allowed to us plebs. Sadly this does also mean they get mobbed at Goodwood! To their great credit both Hill and Vettel spent a long time working this line of autograph and photo hunters.

When these guys disappeared I felt I’d hung around long enough, it was nice to have a de-stress after the traffic problems but now I was keen to explore the paddock for an hour before the F1 cars appeared on track.

While the current F1 stars get roped off garage areas, everwhere else is a little more accessible. Derek Bell and Andre Lotterer were hanging around the paddock – Bell seemed to be there quite a lot! 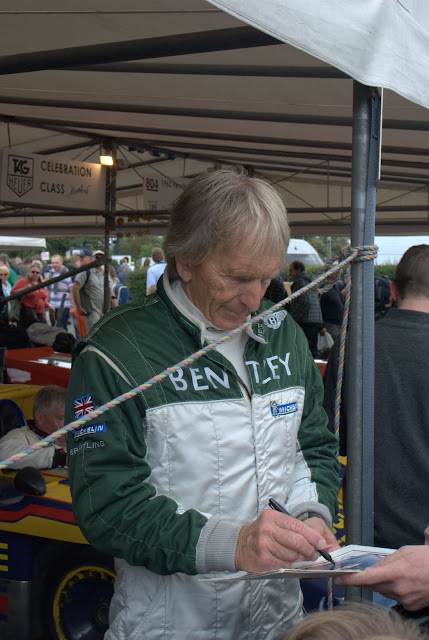 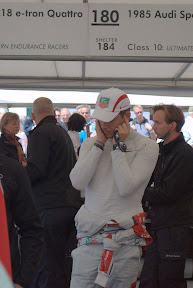 I always love the mix of historic cars and modern classics. This is just a small selection. 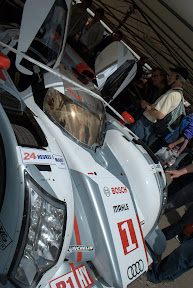 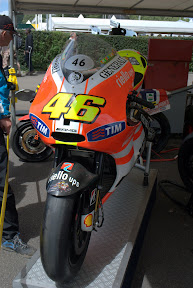 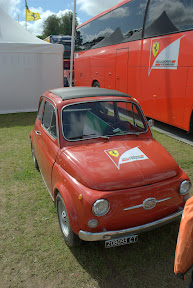 A nice feature was the small collection of F1 six-wheelers, from the famous Tyrrell to the less famous Williams and March.

We headed trackside – or tried to. The place was absolutely packed out as the RAF Tornado display was taking place, as it was to be immediately followed by the batch on the hill featuring the modern F1 cars (usually cars from a season or two ago – current enough to be representative).

A word here for the Tornado pilots who crashed in Scotland this week. I believe the pilots from the Goodwood display were also based at RAF Lossiemouth. Thoughts remain with them and their families.

With the main viewing area beyond the paddock full of people we went further up, to the clearing on the inside of the exit of Molecombe corner. A good place to see vehicles up close (you’d struggle to get closer), however the entry was obscured so cars and bikes appeared almost from nowhere, and sadly the protective bales blocked the view a bit. F1 cars are so low they were half hidden. Still, it was good to see them.

I’ve never understood why F1 cars run in the same batch as the legends of motorbike racing. Bikes have their place at the Festival and it is great to see them, but they should surely run in their own segment while the modern F1 cars run with some more classic F1 cars. You’re trying to cater to two types of fan here – F1 fans aren’t always into bikes, and bike fans aren’t always into F1. Right now the bikers lose out because the F1 fans clog up the hill, and the F1 fans are sitting around waiting for ages for their cars to appear.

One of my favourite things to do is get back to the paddock in time for the F1 cars to reappear. It is very busy but if you time it right you can get a good spot. This year we didn’t quite get it right as we were shuffled around left to right, and we all got split up. They headed to McLaren to find Jenson Button, I went to the opposite end to see Vettel (since Button is more likely to come back next year). I also thought Heidfeld would be at that end, forgetting he was in a McLaren not a Lotus/Renault.

After that it was a visit to the bottom end of the site for a look at the Cathedral Paddock featuring more old racers and the Supercars which were forming up ready for a run up the hill.

We stopped at the link road to watch some old cars go out. Suddenly from the other direction a 1960s Brabham approaches. I looked at the driver. It was Jackie Stewart! In a Brabham! Now I was impressed. Naturally we had to head to the paddock to find him!

Along the way we stopped briefly to see Lord March being interviewed by Tim Harvey, but with JYS around we didn’t we didn’t stay – and it was perfect timing as just as we reached the access path for the paddock, striding out purposefully comes Jackie Stewart himself! At this point I’d love to say the four of us were all smart and witty and chatty and got his autograph and a series of photos. What all four of us actually did was stop and stare because it was Jackie Stewart. Four starstruck fans. He gave us the briefest of looks then strode away to a waiting vehicle. Moment lost. Camera fumbled. Here’s a photo of the man’s back, you’ll just have to trust me. Andy Wallace followed him out, Karun Chandhok too but I missed him.

We’d hoped to spy some more famous people in the Supercar Run. As it was I only saw Rupert Grint (from Harry Potter) lining up for a McLaren ride, and Oliver Webb (British driver in Indy Lights). Lacking more famous people I realised it would be good to see these cars moving, so we headed to the exit lane to watch there. As happened earlier the previous batch of cars (that we saw leave here a bit ago) drove back in whilst the supercars were leaving.

We were treated to 1910s-1970s race cars passing yet-to-be-released 21st Century automotive luxury. Only at Goodwood!

These were the last cars of the day. After a quick stop at the exit of the Drivers’ Club to try and see people it was time to go, another day at Goodwood Festival of Speed was over, and for me that was it for another year.

After the trials and tribulations of the morning (read more here) I was glad to have an enjoyable afternoon. It didn’t completely cure me of the blues but it went some way towards it, and I was pleased to get so much done in the shortened space of time, and to do so with good company.

Will I be back next year? I’d like to think so – but perhaps not on the busiest day of the weekend. I think Saturdays are off-limits now. I will happily try the Friday or Sunday again until such time as they also become oversubscribed.

You can see my full album of photos here.