You might remember I went to the Belgian Grand Prix last year with a group of people and I’d been writing a little diary of our adventures. Those updates had slowed to a halt… but it is time to finish off, here is the next instalment!
If you haven’t yet read the previous instalments you can start here, and there will be a summary post with links to both my write-ups and those of others.. eventually.

Saturday dawned much brighter and drier than the wet, grey days leading up to the weekend. After the very heavy rain of Friday it was a welcome relief. We had another lift in from ‘Bueb’ and had a bit of a longer walk today as he wasn’t willing to chance his luck with the police cordons.

For the first F1 session of the day – Free Practice 3 – we decided to climb the hill at Eau Rouge and find a place on Kemmel, the long straight, as most of the group hadn’t seen it yet and those of us who had were keen to see some F1 cars in the dry there. Whilst it was dry and partly sunny there were also dark clouds hanging around giving the place an ‘impending doom’ atmosphere. Literally the calm before the storm. The view looked even more amazing in these conditions.

Before the session we had a little treat:

I LOVE that sound!

F1 cars at full speed are fantastic. Most of us had never seen them flat out before. I’ve been to Monaco and Goodwood, others had been to Melbourne, Singapore and Donington Park – but none of those feature F1 cars on absolute full throttle at a wide open road course. Out here they are faster, and sound different without the confining echoes of a street circuit. Instead of being restrained, these cars felt at home here, as if they belonged at no other race track. I’ve been to testing at Silverstone and still it wasn’t the same, there seems to be something about these forests giving the cars a sound unique to this course.

You can see a piece of video I shot on YouTube. Apologies for the poor quality but I hope it gives a good indication of the great atmosphere. The poor quality was due partly to my lame camera but mainly it was me not realising the digital zoom is useless. I kept it rolling expecting a car to appear and it took forever! All part of the anticipation of watching at a long course.

I don’t really remember what happened in FP3, I was too busy enjoying the moment, taking it all in, firing off a few photos. To be honest when you are trackside away from the big screens, with all the noise it is difficult to follow the laptimes to see who is fast and who is struggling – even with the excellent KangarooTV unit. I found I was using the KTV to understand things in the moment but after the session would forget what had happened. Maybe that’s just my weird memory though! That’s not a complaint as such, the raw power and energy of these cars in person takes up a lot of your attention – working out who was quick can wait until afterwards, perhaps it is better to just soak up the experience.

Session over, it was back down the hill to the fan zone to grab some lunch. We could’ve got it in any of the many food stands dotted around the track, but to be honest after Friday’s soaking we were a bit tired with the rain and knew it was coming again later today, so we made a beeline for the only covered food concession in the place. It got very busy, very quickly.

It was soon time for Qualifying. At the grandstand your ticket is scanned twice, once as you enter the refreshment area and again as you enter your stand. This seemed odd when there was only one stand there, but there was a large gravel area alongside which was clearly meant for a second stand. It seems the drop in attendance means they didn’t need it.

On the positive side for us, we could stand against the fence to get a superb view of the cars at speed through Eau Rouge. A group of us watched Q1 from here before heading up to our seats for Q2 and Q3. 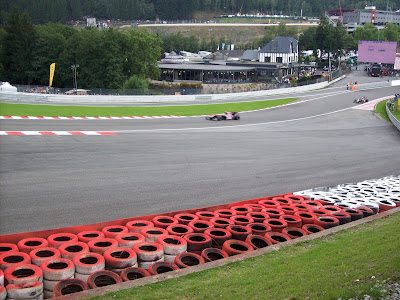 Qualifying was incredible in the damp conditions, cars were going off course and passing each other as if this were the race! The slippery surface and the spots of rain meant the drivers were being tested to the limits. It was the best qualifying session any of us had seen in years and we were here for it in person!

Needless to say the drama was enough that I stopped taking photos and paid full attention to the track and to the KangarooTV to follow the action. None of us could remember anything like it.

The plan initially was to stick around in the stands for the GP2 race, until some said they were off to Pouhon to meet up with Lou_uk (not the Lou in our group, another one). I tagged along partly to say hi and partly because I knew Gavin and Guille were already there too. We set off just as the GP2 cars were released to join the grid, it was a 15 minute walk – would we get there for the start? We hurried.

Naturally everyone else was heading the other way because the F1 action had finished. I had to wonder why you’d pay that much money to only watch the F1 sessions, and depart just as an hour-long race was about to start featuring the F1 stars of the next few years. I bet when the ‘Maldonado to Williams’ rumours started they were all like.. “who?”.

Anyway, we made it to Pouhon as the formation lap was under way which was pretty good going and said a brief hello to Lou and her friends. Lou is a huge GP2 and Maldonado fan and she and a few of our group (including me) also wanted to watch the race particularly as the man himself was up front, so the meeting wasn’t as long as it could and perhaps should have been, sorry Lou! We joined Gavin and he took us to his viewing spot, which he said was MUCH less busy now the F1 session was over.

It wasn’t necessarily the greatest GP2 race in the world, Maldonado and d’Ambrosio had a long battle for the lead which sadly ended late in the race when Jerome pulled off-track. Meanwhile, Parente embarked on a really weird tyre strategy which saw him running a very long stint putting him a long way in the lead, but the stint was so long his tyres eventually degraded and once that happened those behind caught and passed him very quickly.

You can see some GP2 photos in my Picasa album.

Racing Over For Today

On the way out through the middle of the circuit we were passed – nearly run over by – by a truck carrying Vitaly Petrov’s Renault, which he’d abandoned in Q1 after binning it on the wet kerb. We could’ve easily reached out and touched it and the thing looked so fragile you could see yourself pulling parts off to take home! Nobody did though, very civilised.

With that another great day at the track was over. The hill up to Francorchamps and then the 1km walk to our pick up point wasn’t getting any easier but it was all a price worth paying.

That evening’s plan was to check out the campsite’s party evening. A couple of stands selling meatballs, frites and lager. Slightly underwhelming, I mean this was Belgium we didn’t come here to buy lager, right?

Like Loading...
Welcome to my motorsport blog. This is one of the places to come if you enjoy the broad church of racing, if you follow all sorts of races, or if you want to watch or read about them but don't have the time, or perhaps if you don't even know where to start. This is the place for people who watch or want to watch too much racing.