Britain’s premier touring car series, the most high profile championship in the country.

END_OF_DOCUMENT_TOKEN_TO_BE_REPLACED

The 60th season of Britain’s premier touring car series, the most high profile championship in the country.

This means I own an anniversary polo shirt which is now 10 years old!

END_OF_DOCUMENT_TOKEN_TO_BE_REPLACED

Until the other week I hadn’t been to a BTCC round since Silverstone in 2008 (where did the time go?) which ended a 6-year run of visiting at least one round per year, at various circuits including Thruxton, Donington Park and even Knockhill. I hadn’t been to Brands Hatch since 2005’s A1GP meeting. It was time to revisit both.

In this post I’ll focus on my thoughts, for photos from the day please see my previous post or my gallery on Picasa.

Isn’t it great to be trackside? Especially so when not long out of winter, having been stuck indoors for most of it, and you’ve got your nose up against the fence on a warm, cloudless spring day as cars race by at 140mph or more. Just perfect.

Perhaps it felt all the more sweeter after a 3-hour drive to the track. I was glad to find the entrance fed me directly to the spectator bank overlooking the pits so I didn’t need to spend time finding somewhere to watch, where I arrived as the BTCC was on the grid for race 1 of 3. However once the race began I quickly found I didn’t like it there as the fences (and the people) obscured the racing going on up at Paddock Hill or back at Clearways. Cars flashing past is great but I came here to see racing. It was great to get so close to the grid and it would be an ideal place to watch a race with pitstops as you can see right into pitlane – but touring car racing doesn’t have any stops so it was time to move!

I watched the rest of the race from Clearways. In 2005 I was lucky enough to be in the big hospitality building here which offered a great view. I was surprised to find it was almost as good at ground level, with the added bonus that this time I was watching a race on the Indy loop. There was some great side-by-side action here as you’d expect. Even doughnuts from Rob Collard… for which he was later penalised. An American sanctioning body would celebrate it.. a UK/European body awards a penalty. Idiots!

After lunch I went around to Paddock Hill Bend. I was surprised at how little room there is to watch – there’s an earth bank which suddenly drops away to a path. People were perched on the edge of it, I went up there and couldn’t see well over the people. Scratch that idea.

I found the absolute ideal spot was just where the tree line begins on the uphill approaching Druids. An unobstructed view of Paddock Hill Bend (as unobstructed as can be with this many people around), very fast cars very close to you just as they get off the gas and on to the brakes, and a nice view across to Graham Bill Bend to boot. Trees nearby to shelter under if the sun gets too hot or if it rains. Perfect.

I watched BTCC Race 2 and a few supports from here, and after a walk in the support paddock I came back for BTCC Race 3. This is one of my new favourite places in racing. I would consider the nearby grandstand if only to get above the heads of other people, but I don’t think I really missed anything. The only thing I lacked was a view to the left of me, or ‘downstream’ on the track, so I couldn’t see Druids corner or the 7-car shunt caused by oil on the track. Of course, you can never see everything unless you’re at an oval, and I did see Jackson run through the gravel right in front of me as he laid that oil.

The one thing I didn’t do all day was get a pass for the BTCC paddock. The support paddock was freely accessible and I saw Nicolas Hamilton signing autographs there. I did slightly miss getting up close to the BTCC cars and drIvers too, however I was too busy enjoying myself trackside!

The lunch break fell after BTCC race 1. It was then I, as expected, found racetrack food prices to be as high as ever. £8 for the burger and chips I wanted. I settled for a sausage roll for £3. I will say the food selection at most UK racetracks is immeasurably better than it was 10 years ago, commendably so because it often used to be dire, but now they all stick the word ‘premium’ or ‘quality’ on the van and jack up the price. They were selling hot Cornish pasties for a fiver. I can get a hot one 500 yards from my house for less than that and they pay all the costs of renting a shop not a trailer! The price for being a captive audience and not wanting a squashed sandwich from a hot rucksack.

The BTCC has long had a poor reputation as a championship which not only rewards the use of the ‘chrome horn’ but encourages it. Everyone loves a bit of doorhandle to doorhandle racing, that’s a part of this type of racing and long may it continue, I’m not advocating removing it, that’s why we love touring cars. The trouble is, in this series it goes to another level. It was why I stopped attending races after 2008 and stopped watching the series altogether two years ago.

What isn’t acceptable is the continued practice of getting a nose inside and just pushing the guy on the outside, into the gravel. The worst offenders are the biggest name drivers Jason Plato and Matt Neal, who are probably popular because they act a bit ‘bad boy’ on the track, pushing their way around. Most of the rest of the grid doesn’t go in for this type of thing, which is great to see.

I really did miss watching the series so I have actually started watching the races I missed from 2010 and 2011, and I’ve been laughing at some of the post-race quotes. Someone like Onslow-Cole or Shedden would come on, standing next to someone like Matt Neal, and say right in front of him: ‘Well I could’ve easily had him off, but that’s not the way I like to race.’ Even though the guy next to him had already done it to someone else that day. Ha!

I make this point because I’d really hoped the series would’ve clamped down on it by now. They haven’t. Newcomer and polesitter Dave Newsham, underdog hero of the day, was unceremoniously dumped off track into the Paddock Hill gravel by Plato. Penalty? A £750 fine and 3 points on his racing licence. Hardly any penalty at all. I haven’t seen the most recent rounds at Donington Park this past weekend, I understand it stepped up another level with cars off left, right and centre.

Perhaps the more frustrating thing is that both Plato and Neal come across as really nice guys (even when they are complaining about the technical rules!), it isn’t as if they are utter evil bastards, they are merely taking advantage of the series not clamping down on certain actions – they do it because they get away with it. Still, it provokes discussion and ratings and the crowd at any BTCC meeting at every track I visit has always cheered the loudest when Plato wins, so he must be doing something right.

One of the hallmarks and attractions of the TOCA/BTCC package has long been the plentiful support card. This is again true this year. It was a touch weaker compared to past times, with the closure of FBMW UK a few years ago and the sad failure of FRenault UK this past winter, which is by far the bigger loss for British motorsport being the traditional feeder into British Formula 3. A disgraceful loss and I don’t understand how it was allowed to happen, I really do hope something is done to resurrect it for 2013. FRUK offered the chance for up and coming drivers to make a name for themselves in front of a big crowd on live TV, I doubt the many other FR 2.0 series in Europe offer the same.

Despite being two races down the day was still full of action, there was barely 10 or 15 minutes of dead track all day (excluding the lunch break and red flags). A collection of Renault Clio Cup, Porsche Carrera Cup and both big and Junior variants of Ginettas kept the crowd entertained all day long. Hard to believe they let 14 and 15 year olds loose in the Juniors!

Despite the poor driving standards I still love the BTCC. Everything about the day was perfect and I’m sad I was away for so long. The feeling was just as it was a decade ago. There’s an intangible atmosphere at a BTCC meeting you just don’t get when you visit other series. I don’t know if it is the wheel-to-wheel racing, the near-constant track action from a collection of short, sharp races, or the fact it is our big home-grown success story with passionate fans filling the banks and stands all the way around the track. There’s something about a BTCC meeting you just can’t beat. And I didn’t even buy a paddock pass this time!

I’ll be back. See you at Silverstone? (I’m wondering if I made the right choice in booking Silverstone). I’m tempted to go to Thruxton.. but we’ll see about that. Just maybe, funds depending, I’ll go back to Brands Hatch for the race on the GP circuit later in the year.

Here are a selection of photos of my day at Brands Hatch last Sunday for the opening round of the BTCC season. I brought along my new Nikon to try out at a racetrack for the first time, some of the shots are mildly good, most aren’t because I’m not a photographer or because I had fences and people in the way. Still, I had fun, it was a glorious sunny day (unlike today) and a perfect first racing event of the year. 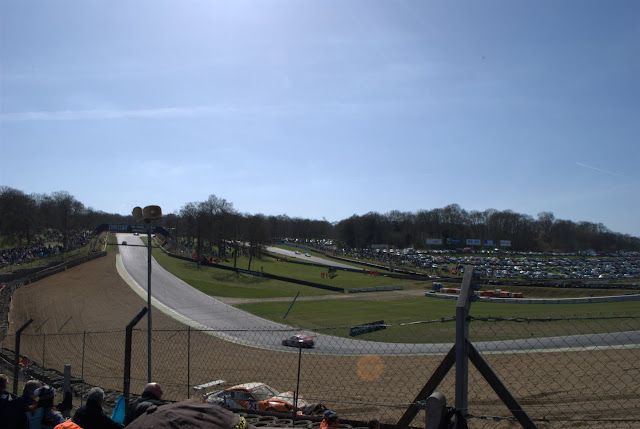 I watched BTCC race 2 between Paddock Hill and Druids: 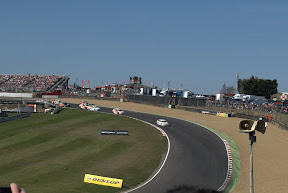 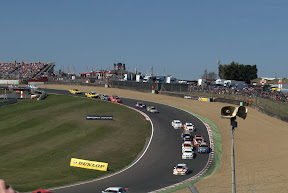 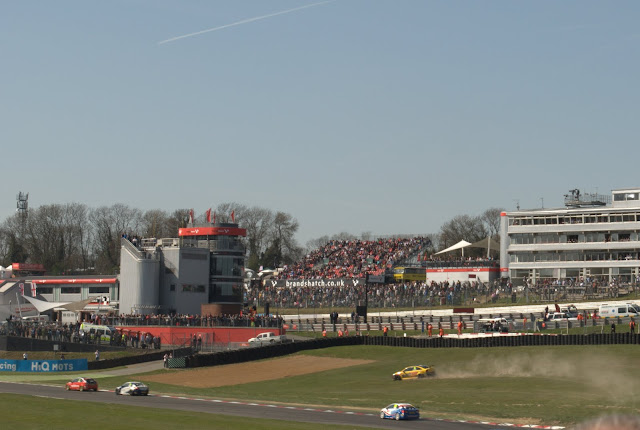 It’s great having 3 BTCC races in a day and a full slate of support races. Here’s BTCC race 3:

You can see more of my photos in my Picasa album.

I Watch Too Much Racing
Start a Blog at WordPress.com.
Loading Comments...